The trip east was supposed to be a lot less rocky and bumpy than the trip west, but at the start, this was not the case.  The winds were fighting the currents, causing seas that fought us.  For much of the trip, I rested comfortably in my bunk. The truth was that the nausea wasn't a problem if I was prone, and you can only sleep so much.  A lot of the time, I felt fine but was awake and bored.  Thank goodness the games on my phone worked!  I wanted to be sure that I would save my limited vertical time for some of the spectacles we were looking for on the way back. There was a significant earthquake "near" Attu the day after we left.  It was 200 km away, so I doubt we would have felt it in any case, but aboard the Puk-uk, every moment at sea seemed like an earthquake.


The first was Pillar Rock, where a species I hadn't seen before this trip was present in the thousands.  Thick-billed Murres breed on this rock spire, along with Common Murres and Pelagic Cormorants.  Seabird colonies are drawn to this kind of remote vertical island where predators are few, but other dangers are plentiful.  Captain Billy did a full circumnavigation of the rock so that everyone could have good looks.  The seas were too rough for a close approach, but it was still quite the spectacle to behold.  It's pretty cool to get a lifer on a trip, and then see thousands of them all at once.

Next we headed towards Sirius Point on Kiska Island, where huge numbers of Crested and Least Auklets nest.  The best time to see masses of these birds is in the late evening when the adults return to the nests with food for the young.  Due to the weather and our altered schedule, we arrived in the early afternoon. There were still lots of birds, including more than 1000 Crested Auklets.  The thing about Crested Auklets is that they smell.  No, not like a murre colony smells, but a scent that has been described as like a tangerine.  Nicole had come up to the wheelhouse and suggested that I step out on the deck to see if I could smell them.  As much as I wanted to, I knew better than to try that.

All along the way, birds approached the boat and provided excellent views.  We also got to witness the life and death struggle that these birds endure every day.  Gulls pursued Least Auklets on a regular basis.  The auklets were almost always able to outmaneuver the gulls, unless they formed a gang.  The usual pattern was that the gull would chase the auklet, which would dive into a wave, only to come up several waves away out of sight of the gull.  However, occasionally, three or four gulls would be pursuing a single auklet. It would dive into a wave, and the gulls would land on the water, spreading out for about 10 feet from where the auklet submerged.  When it would pop up again, it often was close to one of the gang members, and that would be the beginning of the end.  Not long after Kiska, I headed back to my bunk.  Lying down, I was fine.  Sitting in the wheelhouse, I could last a few hours.  Standing or moving around, bad news.  I felt a bit like a prisoner, trapped in my bunk when I'd rather be outside.  Staring at the ceiling, I came up with a haiku:


Horizontally,
Stuck between the sky and sea,
Mal de mer and me.

June 3 was challenging in a different way. We'd seen the expected spectacles, pretty much everyone had seen all of the species that we were hoping to see, and the day was long.  At some point during the day, the seas started to calm down and the ride was much gentler--for a few hours.   We took turns in the wheelhouse, then disappearing to our cabins for rest or resetting.  Whiskered Auklets were on the agenda for the next morning, and I think we all wished the morning would just hurry up and come.  The seas picked up again as the crew took the boat towards Little Tanaga Strait.  We would anchor near this location for the night, with a short run to the auklet colony in the morning. 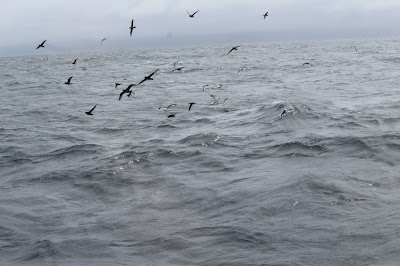 Dawn broke, and it was beautiful.  Our anchorage was calm, and I think all of us were well rested.  We headed into the strait to look for auklets.  It was definitely choppier here, although not as rough as the journey from Attu.  At first we saw a couple.  Then a few more. Then 20.  All of a sudden, we were surrounded by Whiskered Auklets.  Most of us braved the splash coming over the bow to get outside and get closer to the birds.  I think I took 100 pictures, and almost none turned out because of too much movement.  Fortunately, others got great shots, which I'll share with you here. 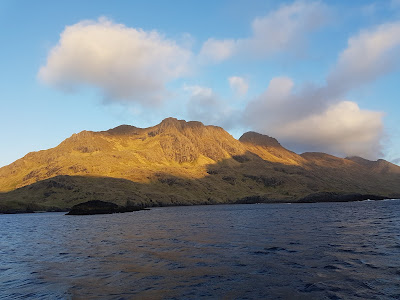 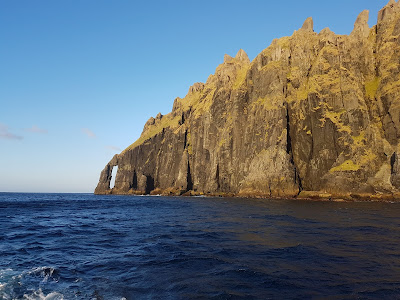 After about an hour of auklet saturation, we headed to our port on nearby Adak Island.  Last photos of the boat, last photos of the crew, last photos of strangers who had become friends over our two week adventure. There was barely enough time for us to get packed, but we managed to be ready when we pulled up to the dock.

The trip wasn't over yet, though. There was still time to try to track down some of those missing birds.  We piled into the trucks and headed off, stopping to see the Hawfinch, Brambling, Gray-crowned Rosy Finch and Common Rosefinch. They seemed to be everywhere!

We headed to Clam Lagoon, where word was that the Far Eastern Curlew was still present.  And it was!  The Gilbert Ridge group may have missed it on Attu, but got in on Adak!  Clam Lagoon was good to us, providing looks at Slaty-backed Gull, Black-headed Gull, Kittlitz's Murrelet, and several other species.  Sea otters with their young were swimming close to shore.  The most surprising find, at least for some of us, was Brad!  He'd hopped the plane and had gotten back to Adak before us, but we'd seen a lot more birds on the journey.  We continued as far as the road would take us around the lagoon, and were on our return when I heard what sounded like a loud burp.  John called out "Rock Ptarmigan".  We hopped out of the truck and headed through a swale to try to relocate the bird.  Within a few minutes, I heard the burp again as he took flight.  I was the last to score this bird for the trip, but happy to claim my 27th lifer in Alaska.

At the airport, the group discussed where everyone was headed next.  Yve and I were staying overnight in Anchorage.  Monica and Greg would be sleeping in their own bed that night, then starting preparations for an epic bike trip later this summer. John was meeting more birders for another tour aboard the Puk-uk. Everyone else was heading south after Anchorage and then home, some not arriving for another 24 hours.  I think our group represented about half the passengers on the flight from Adak to Anchorage.  The plane was so empty, they gave everyone their own rows.  The flights only go twice a week, but it seems unlikely that they are profitable.  Adak is a desolate place, and the buildings are largely in ruins.  Perhaps birding has the potential to help the economy of this small Aleutian community.  The birds were fantastic in Adak this year, as they were in other parts of Alaska.  So why go to Attu?

If you calculate the value of your birds by cost per "tick", Attu is probably one of the most expensive places to go birding, and it's a crapshoot.  This year, we got lucky and saw lots of great birds, but there are no guarantees. We missed some of the most expected species, but found others.

For me, going to Attu was more about the connection I felt to other birders. Attu is legendary. I've never had an opportunity to be part of a legend before.  It was challenging, even gruelling at times. I was in close quarters with people I probably wouldn't have met anywhere else, and now they are a part of my life.  We share Attu.

Birding on Attu made me up my game.  The scarcity of birds kept me focussed, and I found I stayed on them better than ever before.  That might be the only chance I'd have to see that species and I wasn't going to let it go. I think I can use that in everyday birding, too.  Attu was also a reminder that for most of us on board, we aren't going to get better or stronger physically.  I came home knowing that if there are any other physically demanding trips I want to do, I ought to do them sooner rather than later. The easy tours might have to wait.

Despite the seasickness, despite the drizzle, despite all of the challenges of this trip, the one thing that I know best of all is that I am sure glad that I went!  Thank you, John, for providing a way for us to do this, and for your knowledge of all things Aleutian.  Thanks, too, to Neil, Bill, Mike, and Nicole for looking after us, and to my fellow passengers, Clarice, Yve, Monica, Greg, Dave, Brandon, and Patty for making this a trip to remember!  I hope our paths cross again.

Next:  Tips for the queasy (This one might not be up for a couple of weeks. For future reference)


Posted by Ann Nightingale at 2:19 AM