Scopolamine!  The patch that is commonly used for seasickness has side effects that seem to linger.  I'm blaming it for everything now.  ;-)

The days on Attu were blurring together even while we were on the island.  That, and very vivid dreams, seemed to be something in common among the birders and guides who had partaken.  I'm relying more and more on eBird Checklists and date-stamped photos to remember what happened on which day.  The memories come in bits. I know we went to Henderson Marsh, but I can't remember how we got there!  I have pieced together some of those bits, so I hope what I will tell you next is true.

Puk-uk's skiff, the Bumble Bee, transported us to a beach near Brambling Bluff for the quickest access to Henderson Marsh.  It was an easy hike in along roads for the first part, past a war memorial, over sturdy bridges, but some washed out paths along the Henderson River, and up into the marsh.


We passed "Smew Pond", but nary a Smew was to be seen.  The drizzle that was present when we started the hike, had completely disappeared, and necessitated some wardrobe adjustments, at least for me.

John and Neil moved over to the bank as we walked along, hoping to find something tucked away in one of the crevices. When finally a bird did move, it was another Eyebrowed Thrush.  Apparently, in 2016, Rustic Buntings were the everyday rarity; in 2017, it looked like it would be replaced by Eyebrowed Thrush.

The marsh was marshy, as you would expect, but we did come across a few patches that were dry enough to lie out in the sun.  The snow on the mountains was glistening, and I spent more than a few minutes trying to scope a Rock Ptarmigan, without success.  When I was planning the trip, so many people said that Rock Ptarmigan was a "gimme" bird, that they were everywhere on the island.  Not so.  With the increase of the once endangered Cackling Geese, the ptarmigan headed for the hills.  Click on the photos for larger views. 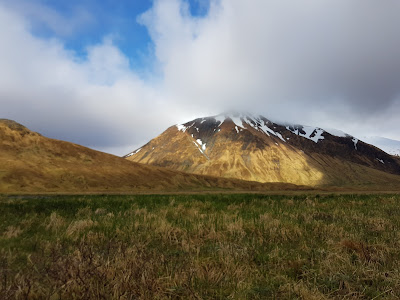 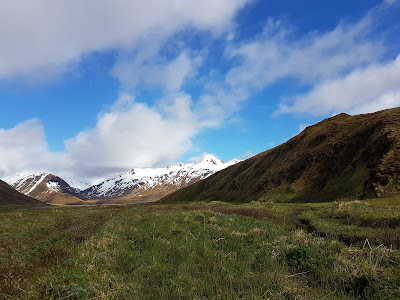 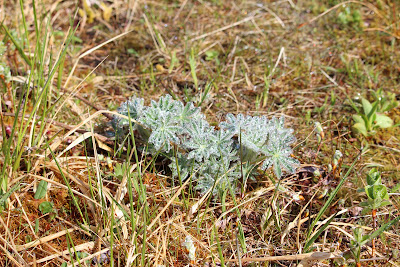 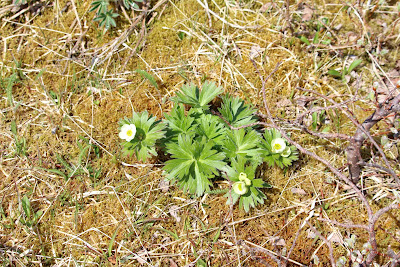 We ate our lunches and enjoyed the sunshine for a while, then headed back to the beach to return to the ship.  John and a few others headed into the marsh to see if there were any Common Snipe around.  Not today.  But we got a quick glimpse of a Brambling on a sandbar in one of the ponds.

Clarice and I split off from the group and went a slightly different route.  By this point, we were splintering a little to try to cover more territory.  We all had radios, though, so if something good was spotted by someone, we'd all know and come running--or sloshing, as the case would have been at the marsh.


Neil dutifully checked along the beach for shorebirds, but once again, we drew a blank. John had warned us that when the weather was good, the birds usually weren't.
We headed back to the Puk-uk for a ride back over to Casco Cove.  I know.  Slackers!

It was a double-landing day!  We headed back to the LORAN station for a bit more snooping around.  There was a bit of wind, but not too much.  Heading east towards Big Lake and Pratincole Cove, we were going uphill and got a look at some of the landscape that we couldn't see from our previous walks.  From this viewpoint we could see the wreckage of a Coast Guard plane that went down 35 years ago, killing two and injuring many of the others on board.  For an island that never really had a lot of people on it, there were sure a lot of people who died here.  You can see the  wreckage in the lower left corner of this Google Maps image.  Casco Cove is in the upper right.
We also could see folks from the Army Corps of Engineers working on the cleanup of hazardous materials on Attu. This is going to be a major undertaking to try to ensure that there is no further damage to the island ecosystem from contaminants from the war and military use of the areas now in the Alaska Maritime National Wildlife Refuge.  For more information on the cleanup, check this link.
The towers that once served for communication have all been dismantled but are still present. 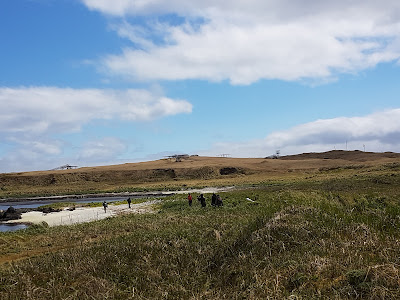 While walking in this area, we came across another surprise--Mike Shelman, crew of the Puk-uk and frequent master of the Bumble Bee was also on the island!  This was his first trip to Attu, too, and he'd been doing some exploring of his own.  He told us that he'd found some interesting plants -- and some Rock Ptarmigan and Snow Buntings up around the snow line.  It turns out he's something of a closet botanist, much to the delight of the birders who'd spend much of the days on Attu wondering about the plants under our feet.

Back on board the Puk-uk in the evening, we watched the movie "The Big Year". It seemed fitting.  Neil and Brandon had both completed ABA big years, and Yve was almost half-way through hers.  I think this was my 14th time watching the movie.  By choice!

There was another surprise on board that night.  The previous night, a Fork-tailed Storm-petrel had landed on the boat and made its way to the galley.  Wildlife rehabbers have advised boaters that if they find such birds on board, they should not release them until the next night, as they are often preyed upon by marauding gulls.  We'd been sharing the ride with a storm-petrel all day without even knowing it!
We stayed up late, as the sun didn't really set until after midnight and got this bird on its way before turning in. Success!

Next: Back to the Bikes!
Posted by Ann Nightingale at 12:58 AM