Becoming a Part of Attu History


This was to be our final day on the bikes.  Over the week, several love-hate relationships had developed, and a couple of divorces had already taken place.  In addition to the increasing sogginess of the ground overall, we'd been handed another challenge.  The vehicles being used for the toxic waste cleanup were tank-treaded monsters, chewing up what was left of the trails that we'd just figured out how to manage. Perhaps their travel over the old roads will be a benefit for next year's group, but for us, it just added another layer of difficulty.

Absence of connection with the outside world also made it challenging to even remember what day it was.  I've consulted a calendar and can now say that it was Tuesday.  It was another drizzly start, quite cold, and with a wind once we were well soaked.  We checked the ponds around the runways carefully for any sign of the Tufted Duck or the Smew.  Although the Tufted was seen at one point, he was disappointingly alone.  Longspurs again dominated the landscape, and despite their beauty, weren't getting much attention from any of us.  We were gathered at the end of the East-West runway when a longspur-sized bird flew right past us and dropped into a willow about 30 feet away from us.   Keep in mind that these willows were barely taller than the grasses.  Conversation continued, but I raised my bins, and started calling out "Not a longspur! Not a longspur!" and giving the best description I could.  Fortunately, John was right there and was able to identify it as a female Common Rosefinch. This was a life bird for most of us, and clearly the most cooperative passerine we'd seen on Attu.  Dave managed to see a pair of these birds along one of the taxiways later in the morning.

Yesterday, a search for Brad's "mystery bird" along the East-West taxiway didn't turn up anything, although the description kind of fit a Lanceolated Warbler.  John thought it was worth another search, and sure enough, as we approached, he heard a  quieter song among the usual clamor of Lapland Longspurs. We surrounded the songster as it moved through the low willows, but as we got close it went quiet.  We didn't see it move out, but somehow it evaded us. We let it be for a while as we checked the ponds and marshes around the runways, and when we returned, it was singing even more.  Eventually we saw it and ultimately were able to photograph and identify it as a Taiga Flycatcher--possibly the same individual seen by a few earlier in the week.  Everyone that was in the area managed to see it.  Brandon had gone off on his own to (successfully) relocate the Gray-tailed Tattler and Common Greenshank that was at Navy Town the day before.

After lunch, there were decisions to be made.  Where did people want to go?  Some of the group (the brave part) decided to climb the ridge in search of birds and plants.  The others (including me) stayed on flatter ground, searching along the Peaceful River banks and making another visit to Barbara Point.  Mike joined the hiking group who were successful in finding one Rock Ptarmigan, some Snow Buntings and the elusive Kamchatka rhododendron.

Neil, Dave and I headed up to the Coast Guard Station and the camp where the clean-up crew was stationed.  Neil got ahead of us, and when Dave and I cycled through, one of the crew was outside having a cigarette.  It would have been rude of us to just keep on going, don't you think?  Their camp was made up of several wind and waterproof tents, with a maximum of four, but usually two, to a cabin.  All of them were  quite spacious and had heaters.  There were washrooms and showers, a medical tent, and best of all a huge tent for cooking, dining and gathering. It was like a convenience store right there on Attu! 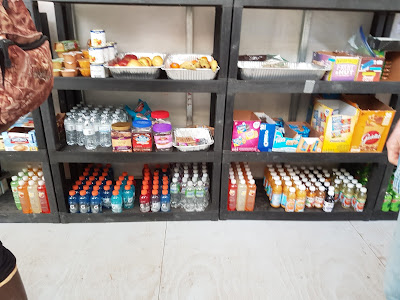 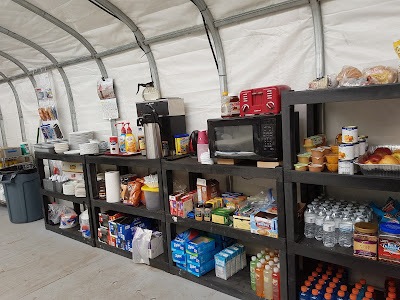 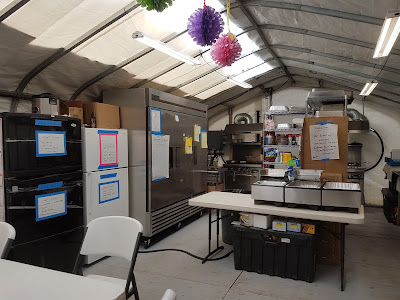 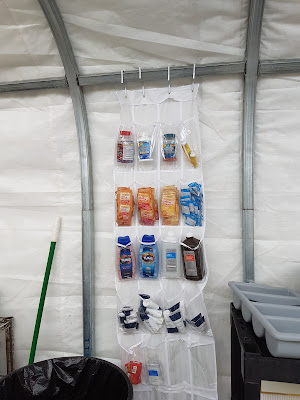 We were told that they had a fantastic camp cook.  We figured that there should be a Top Chef Attu competition pitting our cook against theirs.  We don't know who would win, but the food would be awesome!  They also had two pilots on standby in case of emergencies, and the plane was theirs. If I'd known about all of this luxury earlier, I might have tried to get stranded!  Neil noticed our absence and came looking for us. Our downed bikes were a giveaway, so he joined us for the tour.  We moved back to the beach but came up empty-handed for our efforts.  After a couple of hours, we biked back to Casco Cove just off the runway and Bill came to pick us up, along with our bikes.

Eventually, the climbers came back to the ship, too, with stories of their hike. The view was spectacular, but the climb a real challenge.  Even though I still didn't have Rock Ptarmigan, I felt I'd made the right choice. There was still a chance for this species on Adak!

After dinner, we went back to the LORAN station for the final time.  It was time to pack up the rest of the bikes and bits and pieces and to add our own names to those of the legends on the walls.  Most of us had to estimate our ABA and Alaska bird numbers, but we erred on the conservative side.  Dave was the most conservative asking us to just put "11" as his ABA number! 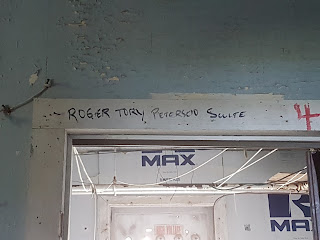 All packed up and ready to go, Gilbert Ridge and Alexai Point would get one more visit before we departed.

eBird Checklist: May 31
Next: Farewell, Attu!
Posted by Ann Nightingale at 4:15 AM