Arrrr! Have you ever been to sea, Billy?

At the Anchorage airport, we ran into another group of birders (including Barbara Carlson) who were headed to Adak.  Service is regular, but infrequent, with only two trips a week.  You go Thursday, or you go Sunday.  Unless you don't.  Weather, mechanical issues, and the occasional volcanic eruption can put a wrench into the works.  Such is the lot of travel in remote Alaska.  Nothing is certain. 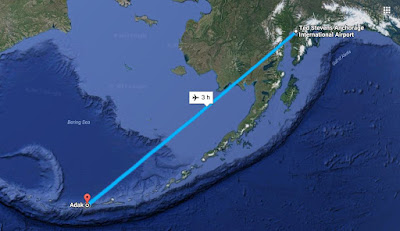 Adak is a three hour flight away from Anchorage, and the birding reports had been stunning.  A Hawfinch, Rustic Bunting, two Eyebrowed Thrushes, an Eastern Yellow Wagtail, two dozen Bar-tailed Godwits and up to 167 (!) Brambling had been seen in the days before our arrival. Several members of our group had taken advantage of the pre-trip and arrived on the earlier flight, so already had some good birds and spectacles checked off when we got there. See the May 2017 eBird list for the island hotspot, if you dare!  (There are other smaller hotspots to check if you want a more complete idea of what was seen.)
Fortunately, our leaders, John Puschock and Neil Hayward, didn't want the latecomers to leave the island empty-handed, so before we headed to the Puk-uk, we piled our luggage and our bodies into two trucks and visited a couple of spots so we could check a few off, too.  Hawfinch was new for most of us, but we also got great looks at Brambling (not 167), and Gray-crowned Rosy Finch. The winds were blowing strongly and sadly, some of the other good birds had already departed--and we needed to as well.

In the two weeks I had to get ready for this trip, I had looked at our ship's website.  The only other comparable trip I'd been on was on a ship four times the size, but with 10 times the number of people aboard. The Puk-uk's 72 foot length seemed fine online, but looked tiny at the dock.

I wondered how 10 birders and the crew would manage in such close quarters for two weeks!  I have often noted that serious birders have loner tendencies.  Sure, they may do just fine in social settings, but they also are fine being on their own.  This setup was definitely going to be shoulder to shoulder, at least for the voyage.


On board, we got to know each other a bit.  As previously mentioned, Yve Morrell is currently doing a Big Year (see her blog here), but there were two other Big Year birders on hand as well.  Neil Hayward (record holder at 749 from 2013-2016) was one of our leaders, and Brandon Reo, on his second Attu trip, had the top count for 2015.  Also aboard were Monica and Greg Lyall from Anchorage, Dave Greening from Minnesota, Patty O'Neill from Boston, and Clarice Clark from Puyallup, Washington.  I was the international contingent.

The crew consisted of Captain Billy Choate, owner of the Pukuk, mate Mike Shelman, on his first trip to Attu, and the person in charge of everything important, Nicole Arevalo.  Yes, Nicole was the cook!

Every outing like this needs an ice-breaker (pun not intended), and ours was about to take place on deck.  On my Antarctic trip, we all had to pile into the lifeboats.  On the repositioning cruise from San Diego last year, we just had to go to the muster stations. On the Puk-uk, we got to put on survival suits and look like lobsters!


The winds of the afternoon died down as evening approached. Leaving the harbor, we managed to see several common west coast birds like Pigeon Guillemot, Common Murre, and Harlequin Ducks, but there were also Aleutian specialties like Laysan Albatrosses, Northern Fulmars, a Crested Auklet and a nice group of Red-necked Phalaropes in breeding plumage.


Probably the best bird of our exit, an Aleutian Tern, didn't stick around for photos.

Inside the ship, quarters were definitely close.  Four of us shared a cabin with only about 10 square feet of floor space.  I landed an upper bunk and a puzzle--how to get into it?  There was no ladder and no step.  Eventually, I figured out how to pull myself up while the ship was in calm waters, but I feared how this might go if and when mal de mer hit.
About an hour away from the dock, we encountered a problem. The auto-pilot kept turning off.  Billy and Mike set about to fix it, only to find that the reason that it was shutting off was a problem with the steering.  We were essentially adrift.  A quick check of the tides showed that we were moving away from the nearby islands and shoals, so we all went to bed after dinner, not knowing whether we'd wake up under way or back at the dock.

The day's checklist can be viewed by those with an eBird account.

Next: Let's get this show on the road!
Posted by Ann Nightingale at 2:52 AM