I think this was the first day that I thought about how close this trip was to being over.  We'd come a long way and been working hard for the birds, but a bit of quiet desperation was creeping in.  We only had so much time left.

The weather has been consistently inconsistent.  It drizzled, then stopped, then sun, then clouds, then wind, then drizzle again. It made wardrobe planning so difficult!

The conditions were right today for a drop off near the stinky whale carcass for a trip to Gilbert Ridge and Alexai Point the "normal" way--first the ridge, then the point.  John and Neil did the heavy lifting by walking inland of the trail, which was now wetter than the first time we'd made this passage.  Their goal was to find some rarity or uncommon bird skulking in the crevices waiting for the opportunity to return home to Asia.

For much of the walk, it was the same as before--Song Sparrows, a Pacific Wren, not much moving around.  The waterfalls were flowing more heavily than when we last passed, bolstered by the daily rainfall.  Fortunately, all the creeks were still easily passable.


Finally, we spotted some small birds flying around the haystacks.  They were Brambling, and gave us hope that perhaps some other new birds might be around.   A Gray-crowned Rosy Finch was also spotted by some in the group. We continued along, when all of a sudden, a Gray Wagtail took off in front of us.  This was probably the same bird we'd chased a few days earlier, and like before, it flew away from us.  But then it did something different.  It looped around and flew up to a clear spot in a nearby waterfall!  Finally, we all got decent looks and a couple of people even managed to get photographs.

You have to wonder about the people who name birds.  When I got a look at this one, the last thing I noticed was that it had a gray back.  It was brilliant yellow with a black throat.  And gray was the first thing the namers noticed?

Even though we were going slightly uphill, the walk in this direction seemed easier. I suspect it was because we were fresh and hadn't had a two-hour bog walk before starting.  The group had stretched out along the trail and Brandon reached Alexai Point ahead of the rest of us.  He relocated the Tundra Bean-Goose and saw the Eurasian Skylark.  It seemed that most birds we'd seen since our arrival had stuck around. A Common Snipe flushed from the grasses at the point, the first we'd seen. Those who had been on the island last year said that they'd been found frequently, so we were glad to finally get one.  Then a call from Brandon on the radio. He had a swallow flying around over a couple of structures on the hill.  It turned out to be a Barn Swallow, but not the American subspecies. This was the Eurasian Barn Swallow, which has quite different plumage than the ones we are used to.  It was strikingly beautiful.

We walked the beaches at the point and found a single shorebird--the same Red-necked Stint that we'd seen on our first trip there.  Birds were definitely sticking around.  Did they know something we didn't?

Along the beach we found a different kind of carcass. Not an animal this time, but the apparent remains of a wooden boat. 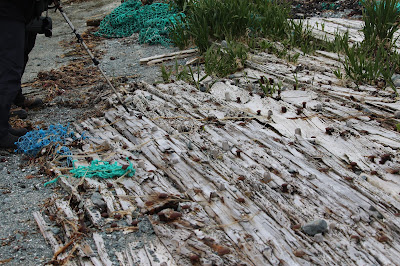 The weather was taking a turn for the worse, which could mean good things for the next day.  Back on the Puk-uk, Nicole was preparing her fancier meals for calmer waters--and alternate choices for spice wimps like me!  For dessert, we had views of three Black Scoters in Casco Cove where we were anchored.

eBird checklist: May 29
Next: Shorebirds!
Posted by Ann Nightingale at 12:46 AM