Whenever you go on an adventure, "plans" are more figurative than literal.  I know John was regularly asked "What are the plans for the day?" Only one answer could be true: find birds!  The morning was supposed to start near Debris Beach where we would set off on a hike along Gilbert Ridge, ending up at Alexai Pt.  This would give us opportunities to find passerines along the ridge and then focus on seabirds and shorebirds at Alexai Pt. before being picked up there to return to the Puk-uk.  I've included a couple of maps here that were provided in our checklists so that you can get a bit of the lay of the land.  Click on the images for larger versions. 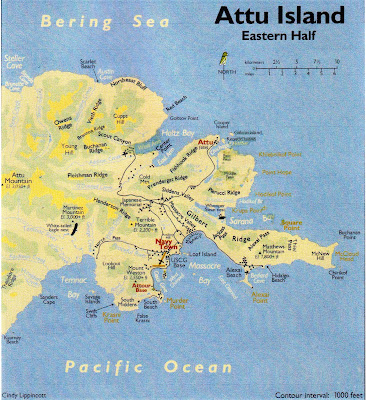 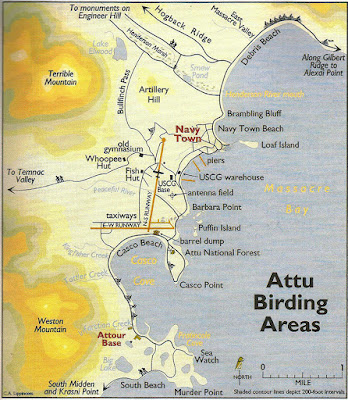 The winds were against us, though, so the plans were changed.  Instead, we would motor across Casco Cove and go ashore at Alexai Beach.  In the "old" days, there was no choice--you either hiked or biked the 10.5 mile route to the point. Alexai Beach was out of the wind.  It felt amazingly calm.  That is, until you got over the top of the grass-covered dunes on the beach.  Then the wind came through loud and clear.  The point has a wide range of habitats--some natural, and others returning that way.  In many places the ground is covered in Marsden mats, blankets of now-rusting metal that provided landing strips and sturdy surfaces for military vehicles during WWII.
Once you leave the beaches, though, the overall ambiance of Attu, at least in May 2017, was "wet".  Alexai Point, or at least the upland portions of it was deep moss and thick, short vegetation.  Gumboots were a must, and rainpants just about as essential. Even when the drizzle stopped, water was trying to get to you from below.  The tundra was bursting with life, though, with mosses in all shades of green and vascular plants racing to get into flower and set seed before colder weather returned.  Even in the week we were there, you could see massive changes in the plants. 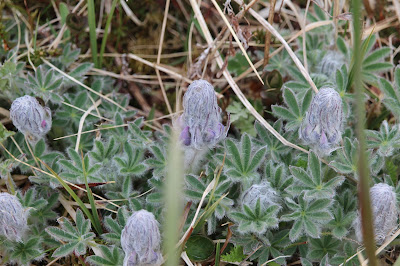 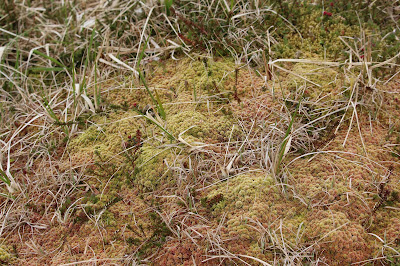 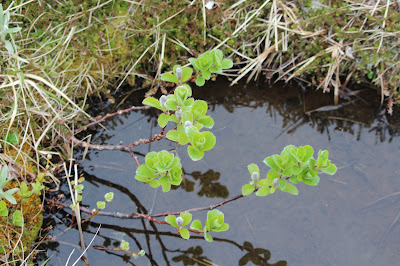 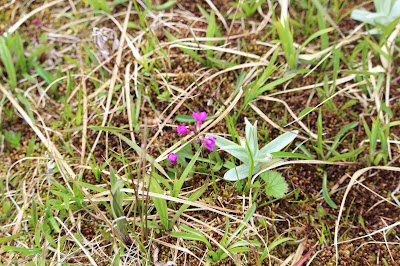 The plants weren't the only ones in a hurry, though.  Cackling Goose nests were abundant, and we even came across a couple of gull nests.  I'm somewhat grateful that the eiders hadn't nested yet, as I understand that their nests are defense include an olfactory assault.

The nesting Cackling Geese would lie still until you were within about a foot of the nest, then burst into the air with loud honking.  On more than one occasion, I saw a fellow birder almost upended by the surprise.

Just over the second ridge, we came across a "target" species, a single Tundra Bean-Goose.  This was a lifer for many, but not for me, as I had seen one in Oregon in January 2015.
Like so many Attu birds, it was skittish and moved away, but not before Neil got a few pictures.
As we made our way along the terrain, we could see offshore rocks with a few cormorants.  Lucky for us, they included Red-faced Cormorant, one of the species I had hoped to spend some time with.

Next up, a little pond with Red-throated Loons in breeding plumage.  Spectacular!
As we came ashore, John had given me an assignment: I was to find a Eurasian Skylark.  I know he was joking, but as I made my way to the loon pond, two birds flushed and flew away from me.  One was the expected Lapland Longspur.  The other was the butt end of a bird that I have seen many times with visiting birds in Victoria: Eurasian Skylark!!  Mission accomplished.  Sort of. Unfortunately, only one other birder, Greg, got on the bird that day.  Brandon saw it again a few days later.

We crossed the upland areas of Alexai Point and made our way to the beach.  As the first of us went around the corner, a Short-eared Owl was flushed from the grass, the first of two species I really wasn't expecting to see that day. Walking through the sand, sponge, seaweeds and bone, we could see the area was very well populated with beach flies.
Waters off the Aleutians were once the home of large whaling operations, at least for a few years.  From the USFWS site:
"1843
Thar She Blows!Bowhead whales, rich in oil and plates of baleen, are first harvested by newcomers to the North Pacific and Arctic waters. In the next few years, more than 500 New England whaling ships set sail for these new whaling grounds. The slow-moving docile beasts are easily captured, rendering 100 barrels of oil per whale. The most prosperous whaling year is 1852 with 2,682 bowhead whales harvested. By 1855 bowheads are near extinction."
Eventually, Neil saw a shorebird among the tidepools on the south side of the point.  It flew around a bit, but settled down and finally let everyone have a good look at it.  A Red-necked Stint!  Brandon and Neil got in close for some great shots.

After a couple of hours at Alexai, it was time to move on to Gilbert Ridge.  We slogged our way through the moss again, finding a Rock Sandpiper in a very interesting location and then stopped for lunch at the trailhead before making our way down what was once a road--an important highway for visiting birders.  Now it was barely a trail, but it would suffice.  The plan was to go about a third of the way along the ridge, then turn around and come back to Alexai Beach for pickup.  Captain Billy was standing by!

The ridge was stunning!  The best part was that we were walking at the foot of it and didn't have to go up to the top.  The trail ran close to the edge of the bank/cliff to the beach, and although it was washed out in a few areas, it was an easier walk than through the moss.  John and Neil checked every crevice and shrub looking for anything unusual.  Just a couple of days ago, Brad had turned up some vagrant birds here.  Sure enough, one of the first to be found was another Eyebrowed Thrush.  There were a few! 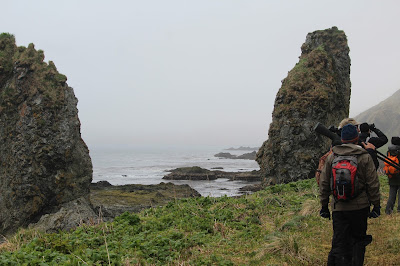 One of our targets was Gray Wagtail (because Brad had seen some), and all of a sudden as we approached a creek, one gave a characteristic call and flew about 500 m farther down the trail.  We followed.  As soon as we got close, it flew again.  This was true Attu birding.  We got looks, we got checklist "ticks", but it wasn't especially satisfying.  It was time for a decision.  Do we go back and get on the boat as planned, or do we continue along Gilbert Ridge?

It was a split decision.  A call was made to the Puk-uk, and the crew confirmed that they could pick us up at the Navy Town Beach, a good distance and a river crossing away.  Some among us decided to follow the original plan.  Those who suffer from FOMO (Fear of Missing Out) had to push on.  And a push it was.  We saw the flitting wagtail a couple more times, and enjoyed some beautiful scenery. 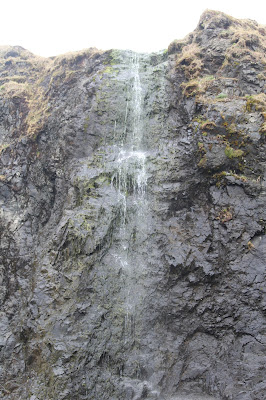 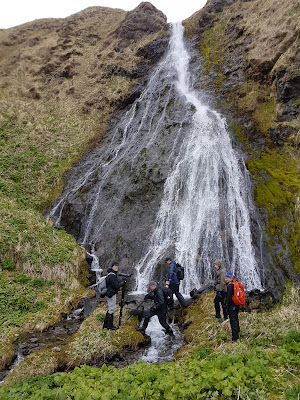 Perhaps the biggest surprise for me was that we also saw and heard Pacific Wrens. We heard the tinkling song and our thoughts immediately went to Siberian Rubythroat, but within a few seconds, we realized that they were wrens.  Like Yve and her egret, I had come a long way to see a yard bird!

Gulls ahead on the beach gave away a feast in the making--at least for them.  We saw and smelled a dead young sperm whale on Debris Beach, crossed the river and arrived at Navy Town Beach, completely knackered, as Neil said.
I was relieved it wasn't just me!  A comparison of step counters agreed it was a long, long walk (mine was over 34,000 steps at that point), but the distances were all out of whack.  I think this was a combination of short strides due to the terrain as well as the obvious differences in height.  It felt like a very long way.  The Puk-uk was nearby and thankfully, Mike came out in the skiff to retrieve us.  We heard that the folks who had gone back were relaxed, dry and had been given soup and hot chocolate by our cook, Nicole.  Some people have all the luck!  We wasted no time matching that when we got aboard.  We spent a quiet evening "at home" watching "The Big Lebowski".

Next: Henderson Marsh and Massacre Point
Posted by Ann Nightingale at 9:55 PM