I am not a traveller by nature.  I'm sure that some of my friends would find that puzzling, as I always seem to be going somewhere, and sometimes to surprisingly far flung places.  A few years ago, I went with Cheeseman's Ecology Safaris to the Falklands, South Georgia and Antarctica (blogged on Birdfellow.com). Other trips have been decidedly closer to home, especially my Vancouver Island Big Year in 2015 (see vibigyear.ca). I guess, although I'm not a "big A" adventurer, I like to go places that aren't especially comfortable or luxurious (or hot). I am drawn to unusual opportunities.

Attu has been something of a fantasy trip for me for some time.  I didn't think I'd likely ever get there, although I speculated about it on many occasions.  For one thing, there aren't large tours or public flights there anymore, and my trip to Antarctica more than familiarized me with the trauma of seasickness.  One company, Zugunruhe Birding Tours, has been taking small groups there for several years, (the only company to do so), and their tours include a significant pelagic component. Would I ever be ready to stare down the prospect of several days of rocking and rolling nausea again?  Attu trips are not for the faint of wallet, either. Let's just say that deciding to go on one of these adventures requires several levels of commitment.

If you are a serious birder, or a fan of the movie "The Big Year", you know about Attu.

If you are not, and this clip won't play, it is the westernmost of the Aleutian Islands, a mecca for extreme birders who make this trek in hopes of seeing birds that have flown or been blown over from Asia.  It's a lottery.  You can make this huge effort and come back essentially empty-handed, or you can be rewarded with sightings of a lifetime.  Either way, it's an adventure!


Out of the blue, things started happening, beginning with a text from my friend Ed Pellizzon.  The van.  Would I consider selling it? 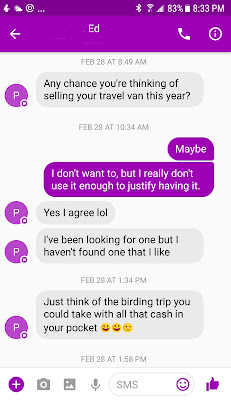 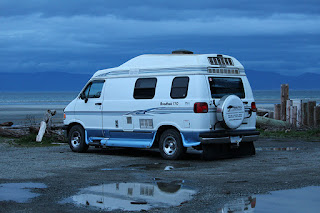 I bought my Roadtrek van in 2013, thinking ahead to a Vancouver Island Big year I was planning to do (and did) in 2015.  I had all sorts of plans for using it, but the fact was that between my schedule and the price of gas, it wasn't getting used enough.  I knew I should sell it, but I really, really liked it.  I was in procrastination mode.  As long as I didn't advertise it, I wouldn't have to make a decision.  Until Ed.  "Just think of the birding trip you could take with all that cash in your pocket," he said.  Fast forward a couple of months and the deal was done.


Just about that time, another friend posted a Facebook message that really set things in motion.

It was destiny.  A few words with John, late night searches for flights, and I was set to be heading to Attu in just a couple of weeks.  I had to rearrange some prior commitments, and am grateful for the tolerance of the people involved, but this was an opportunity not to be missed!

Next: North to Alaska


Posted by Ann Nightingale at 1:14 PM