Back to the Bikes

Just after we got used to the good weather, things were drizzly again this morning.  Drizzle is the most problematic, as not only does it make things awkward in terms of wardrobe management, but optics are never happy in drizzle.  The only thing is that we've been told bad weather means good birds, so we at least start the day optimistically.

Today was another day on the bikes, and when I got on mine, I immediately remembered the spots that I had bruised and chafed on Day 1.  As much fun as this trip is, each day seems to also include an element of physical torture!  Pro tip: Attu participants who do not ride bikes regularly should bring padded bike shorts!   I definitely have to work on my bike riding skill when I get back home, but I've become quite adept at strapping my tripod to the bicycle rack.

Before we got going in earnest, we made a side trip to the "Upper Base" building.  No, you are not supposed to go in. Yes, some of us did.  This was the building that was home for trip leaders and also housed the kitchen and main dining area As I looked around, I imagined some of my friends of today hanging out or toiling in here a decades ago.  They might have a heart attack when they see the photos! 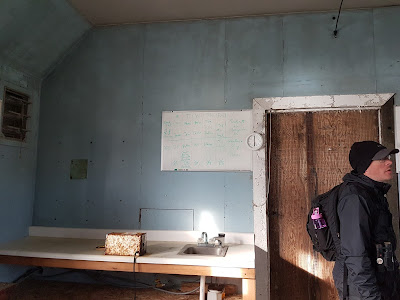 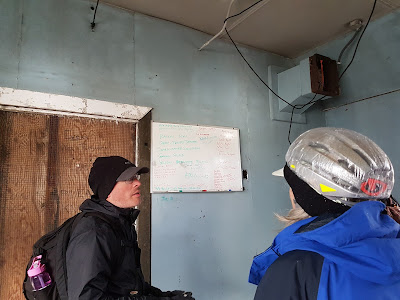 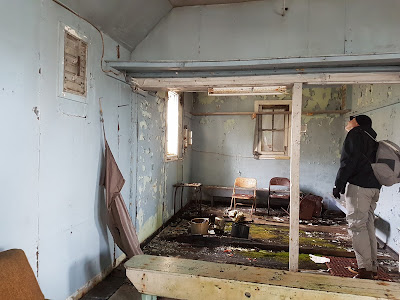 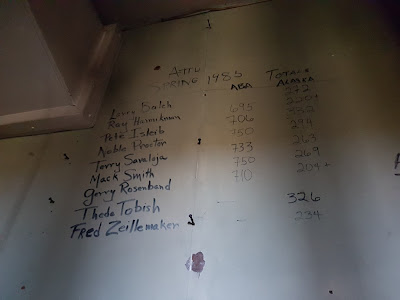 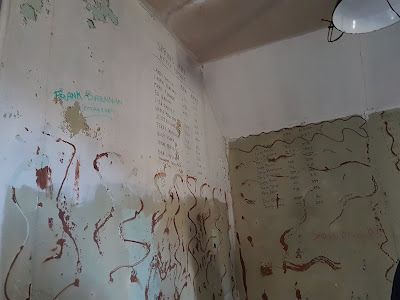 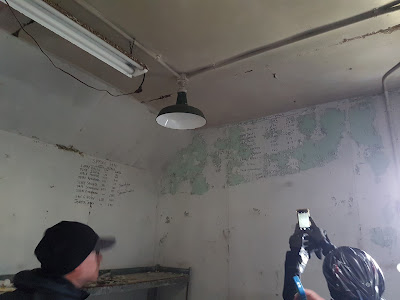 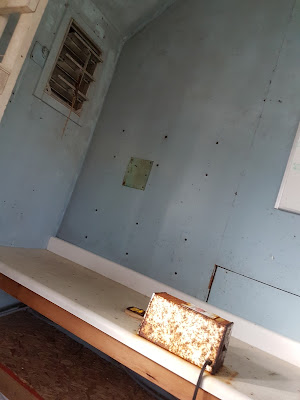 The walls told a story!  There WERE birders here between the end of Attours (2000) and the beginning of Zugunruhe's tours (2010).  Aboard the Puk-uk at some point, John told us his story.  Although Attours shut down in 2000 when the runways were closed to the public, people from the University of Alaska continued to come.  While common logic suggested that Attu birding was only as good as it was because there were so many birders to cover the landscape (50-70 on most Attours trips), the small teams from U of A were managing to "collect" a good number and variety of specimens. Yes, they shot them.  John's logic was that if teams of three collectors could find good birds, why not small groups of birders, and the relationship between Zugunruhe, the Puk-uk, and Attu was begun.  And that was a great thing for those of us lucky enough to participate.

Despite the rain, the omen for good birding, it seemed unbirdy as we started the day again.  John and Neil left the trail to search the hillside for hiding birds, and less than an hour into our trip, John thought he heard and saw a smallish flycatcher. As we chased after it, we managed to turn up at least two Olive-backed Pipits (actually got good looks), and a Song Sparrow fledgling that had a very flycatcher-like buzzy call.  But the first bird was still eluding us. Neil and John pulled out all the stops to try to relocate the probable Taiga Flycatcher.

While John walked the ridge, Neil headed up the near vertical bank, with Brandon, Dave and Yve taking different courses to the top. Almost at the top, Neil lost his footing and started glissading (henceforth known as the Hayward slide) down the rock and grass surface, camera in one hand and scope in the other.  When he finally came to a stop, thankfully he and his gear were all intact. He admits it was a scary experience, though.  Brandon was on a bit of stable ground about half way up, and found his way down safely after witnessing how Neil did it.  From the bottom, Clarice made the comment of the day.  Watching Neil regroup after his slide, she asked, "Do we all have to do it like that?"  After at least an hour trying to relocate the flycatcher, we headed out to a few other spots to check for birds, but knew that we'd be back to try again. Yve had caught a glimpse of it, but wanted a better look to count it for her big year.

I think it was around this point that Patty decided that feet were better than wheels.  We were lucky enough to have decent bikes, not the old rusty ones famous from the movie, but the terrain was not kind to those who didn't regularly ride off-trail. Patty was on a quest for her 750 ABA bird and wanted to do it without sacrificing any bones. She wouldn't be the only one to abandon her bike before the trip ended.

Today's ride included a long coast down the runway after checking out the various taxiways and revetments.  It was kind of strange "flying" down the same runway that fighter planes did a lifetime ago.  Clarice's interest in Attu included returning her father's ashes to the location he was based during the war, a mission she accomplished with the help of Mike later in the day.

The group split with some staying behind to look for the flycatcher, while others went by bike to a new location.  I was part of the bike gang. We continued on past the Coast Guard Station, where a whole crew of people are working on site clean-up.  I'm not convinced that it's even possible, but I'm glad they are trying.  The clean-up crew had a skookum camp, though!  (Non-Canadians may have to look that up.)  And a plane!  I'm not sure what rules apply for landing planes on Attu these days, but I have to admit to a few moments of wondering how to get a ride back on it.  We had two pilots, Monica and Greg, in our group, and it apparently was a twelve passenger plane.  Hmmm..... ;-)

At nearby Barbara Point and nearby Debris Beach, the rusting relics of equipment from the war provide shelter for marine plants and animals, which included a Ruddy Turnstone this afternoon.  The beach is strewn with equipment which was apparently fired up and headed towards the sea at the end of the war. There it sat, useless to anyone, purposely ruined by salt water washing over and through it. 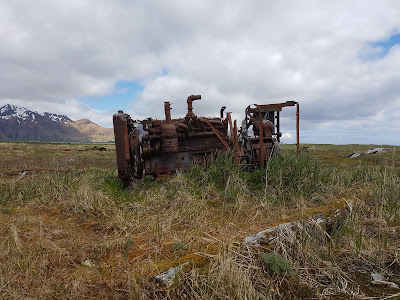 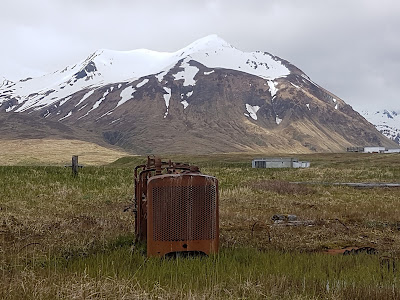 Attu is an island of extreme contrasts.  On one hand, it has amazing plant life and geology, and on the other, it is a testament to the disregard we have had for the planet we live on.
Returning to try to locate the flycatcher, we spaced ourselves along the ridge face where it had last been seen. Despite the best efforts by several people, it wasn't relocated.

Greg and Monica are also long distance cyclists, and exploring some of the farthest reaches found a Brambling not far from where we saw one yesterday.  A new trip bird for me was a Greater Scaup back near the LORAN station lower base.

That evening, the trip's annual poetry night was held.  This is an event where people can share their own work, read from the books on board, or share other poems or readings that inspired them.  They ranged from Robert Services's "The Shooting of Dan McGrew", to a brand new poem written by crew member, Mike Shelman, just before the party started.  I recited Linda Rockwell's poem on migration, posted to Facebook about 18 months ago.  It gives me shivers.

MIGRATION
While you were sleeping last night
I flew 300 miles without stopping or eating.
An ounce of bright feathers, heart, muscle,


And bones as light as air.
Danger everywhere:
Predators, exhaustion, windows that look like sky.
Today I eat seeds in your garden.
You do not notice a miracle.

Next: Gilbert Ridge Revisited
Posted by Ann Nightingale at 1:36 PM