Tuesday morning started with breakfast, which of course, includes a green salad. The Radisson hotel has been great in terms of shuttles and a good variety of food. It's also very quiet, surprisingly since the place is packed.  Did I mention the heated bidet?

Phil and Marilyn were headed to their next destination right after breakfast, so Tracy and I just walked around the neighborhood checking out the local birds in the morning. We found a lot of the same birds that we had that Marilyn, Phil, and I had found the previous day, and got some very nice looks at them.  The tits are still causing a bit of a conundrum.  Coal Tits and Japanese Tits are very similar, except for an obvious stripe down the belly on the Japanese. None of my photos show a dark line, so I thought I was looking at a Coal Tit. I've since found out that that is less likely than the more common Japanese Tit, but I'm still not sure. Tracy and I came across a pair feeding young in a nest in a power pole. 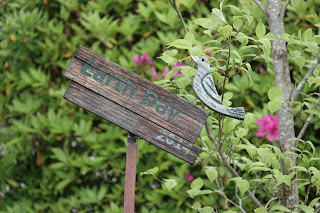 About midday I Tracy and I parted ways, with Tracy heading to Karuizawa, and me heading towards Abiko for the afternoon. Neither of us are experienced train riders, and I suspect it really showed. Transportation is definitely a hurdle for the uninitiated here, which made me appreciate the hotel shuttles even more.

Tracy was headed to the resort town, where I will head tomorrow. She did not have a reservation and ended up having to stand the whole way for the  trip. Ugh. Fortunately, I have a Japan Rail Pass which gives free reservations. Unfortunately, I have been unable to actually book a reservation through their online system which seems to be under constant maintenance. More on that later.

There are many different rail companies in Japan and although I was headed in the right direction by going to the Narita station, it turns out there is more than one. Fortunately, the |JR station is only a couple of blocks away from the drop off site, so after a bit of a false start, I ended up in the right place and on the right train. It was empty which didn't seem quite right. The ride to Abiko was uneventful, which is a good thing. 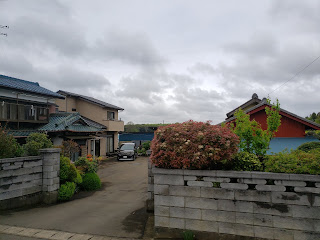 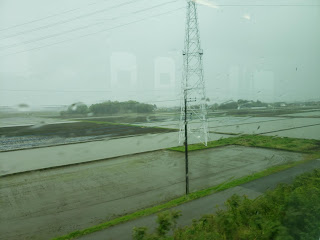 Once there, I had to find a bus to get to my destination which was the lake near the Museum of birds. The museum was my plan B in case the weather was too bad for birding. I had hoped more people would speak English here, but it does not seem to be that common. A lot of people are using the translator apps on their phones, which are certainly helpful, but still have a long way to go.

I got on the correct bus and with some gesturing and holding out of change and passes discovered that my Japan Rail Pass was not good on this particular bus line and that I had to pay. Fortunately for me, the bus drivers here still make change, and I was on my way. 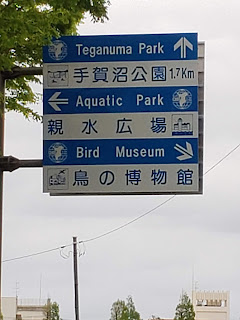 Once off the bus near my destination, I headed towards Lake Teganuma. My original plan had been to go there early and circumnavigate the lake. In the sunshine, of course.  A late start and drizzle cut those plans short. I wasn't going to have much time so I had to make the most of it.

There were some really nice birds there including Little Grebe, Bull-headed Shrike, and Oriental Reed Warbler. There were also some familiar faces like Green-winged Teal, and the ubiquitous Eurasian Tree Sparrow, Feral Rock Pigeon and  White Wagtail.


There were two of these plovers in one of the fields, but with decidedly different neck collars.  This one was more like a bow-tie than the standard band.  It made me think I must have two species, but this was the only one I could find with the bold yellow eyering.

A definite highlight was this Bull-headed Shrike.  It was very vocal and active, and didn't seem to mind having its picture taken.

One bird I was particularly happy to see was the Common Kingfisher. I heard it first, and recalled the call from my studying for the trip, but I couldn't remember what bird made it.  Eventually, I figured it out and found this beauty.
Another highlight was seeing a battle between a crow and a hawk. Obviously, these happen everywhere, but in this case it was a Carrion Crow and a Gray-faced Buzzard.
A farmer was working one of the fields.  Made me think that there is some potential here for Maber Flats! 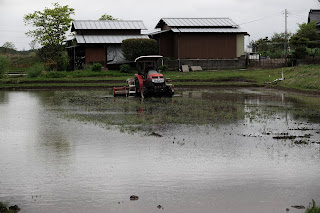 Before long I had to turn around and find my way back to the train station via the bus. There was no time to visit the bird museum, but I suspect that you'd need at least a couple of hours to do it justice, in any case.

Using Google Maps with awesome, except that it didn't tell me which side of the road I needed to be on, and I watched my bus leave without me. (This started a trend.) It was only about 20 minutes until the next bus, but it would also mean that I would miss my connection in Narita. Oh well. I caught the next bus and got to the train station and onto the train back towards Narita. I felt like a bit of a pro on the return trip because I even knew what change I needed for the bus!

I arrived with what I believe was about 50 minutes to spare, based on the schedule that I had in hand. The small problem was that I had picked up the Japanese version so I couldn't read it but having made this run the previous day, I thought I had it figured out. Wrong. Once again as I approached the bus stop I saw my bus leaving without me. This time, I had something I could do while I waited for the next bus. I headed back to the J R train station to make a reservation for my trip to Karuizawa. Again, no English available, except for these wonderful translation apps on our phone. The staff at the train station use them, too. The gist of it though, was that given that it is Golden Week, the trains are very busy and the earliest reservation that he could give me was after 3 p.m. I had planned on heading out in the morning. There are some unreserved seats on board, but they are apparently very hard to get and I will be carrying a LOT of luggage. Looks like I could be following Tracy's path and standing for a long train ride. Yay! I was able to get a reservation for the first leg of the trip, though, so that was something.

I feel like I am spending as much time (or more) travelling around as I am birding.  Hopefully, that will change in Karuizawa!
Posted by Ann Nightingale at 11:58 AM