Last Day at Sea and Home for a Rest!

When we started this trip, we had no idea what to expect.  With the exception of a decade old trip report from some British guides, and very few eBird reports, it was all pretty much a crap shoot.  We didn’t know if we’d get spectacles or spectacularly slow days.  It turns out we got a bit of both.  As mentioned earlier, the seas have been remarkably calm and today was another glassy ocean.  We started too early, as for the third time this trip, the ship’s newsletter got sunrise wrong.  Note to future travelers: check sunrise times yourself!  We had to put the clocks ahead one last time, so getting up an hour early was a special kind of slap in the face. 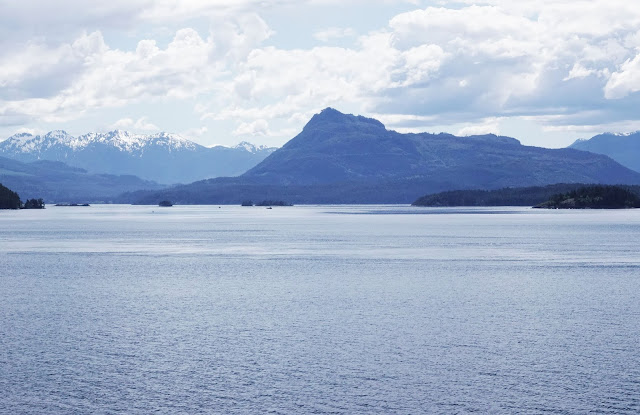 Like yesterday, the birds were few, but now crossing Hecate Strait, they were also mostly distant.  In some ways, it felt like our first day where people were calling out “bird”, but had no confidence in offering an ID.  We saw our last Black-footed Albatross of the trip, then our last Tufted Puffins. Jim, Jeannie, Mary and I took the first shift, but after two hours, when others came to the deck, we headed inside for tea and an early breakfast. Soon, people were doing other things, enjoying the scenery, watching for whales and porpoises, but not counting birds anymore.

A few days ago, we offered the cruise director the opportunity to have us do a presentation on some of the birds that we’d seen along the way.  He suggested that he could put them up on the big screen in the atrium of the ship, where one of the most popular meeting spaces and guest services reside.  This morning, about 40 of our photos were on display for several hours.  This prompted a number of people to actually stop and talk to us while we were out not counting birds this morning. 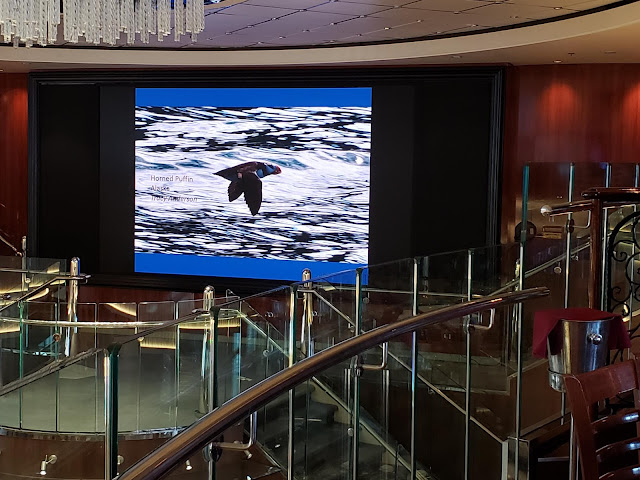 As we approached the north end of Vancouver Island, I got my first view of the windmills near Cape Scott.  I bet there are a lot of people who are completely unaware that we even have windmills on the island.


We thought as we got to the confines of the inside passage through the island between the mainland and Vancouver Island, things might pick up, but the glassy state of the water kept most birds on the surface and well away from our optics.  If I had given it some careful thought, I would have realized that a Vancouver Island spectacle was unlikely.  Most of our winter resident seabirds headed north long before we got there. A pilot joined us for the tricky route through Johnstone Strait and the Seymour Narrows. 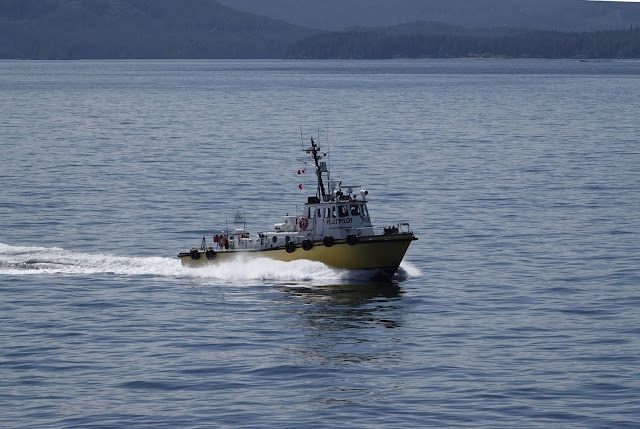 One bright spot was a planned “rendezvous” with lightkeeper Ivan Dubinsky at Scarlett Point on Balaclava Island. Ivan tracks and photographs many of the fishing boats and cruise ships that pass by his station, and we were definitely on his radar.  As we approached, we could see him on the helipad, camera in hand, to capture us as we went by.  We waved, but he wasn’t able to see that in his binoculars.  (I had cell service for some of the passage, so we were texting.)  When he posted the photos on Facebook, you could see us if you look REALLY hard. We’re above the “wegion” in Norwegian Jewel.
I set out to get the blog writing done, but didn't want to miss the scenery.  I found a shady place on the sundeck that allowed me to appreciate the beauty of the islands and see some Dall's Porpoises hanging out along the side of the ship. 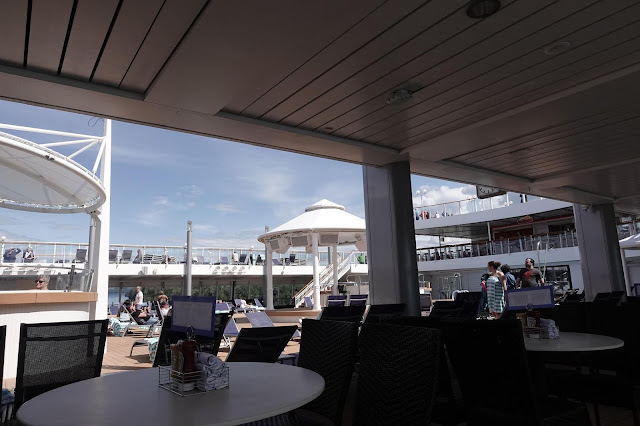 We live in such a beautiful place.  I am sure that the people who had never seen the coastal forests were blown away as we wound our way through the islands.  I wonder how they felt about the clearcut scars? 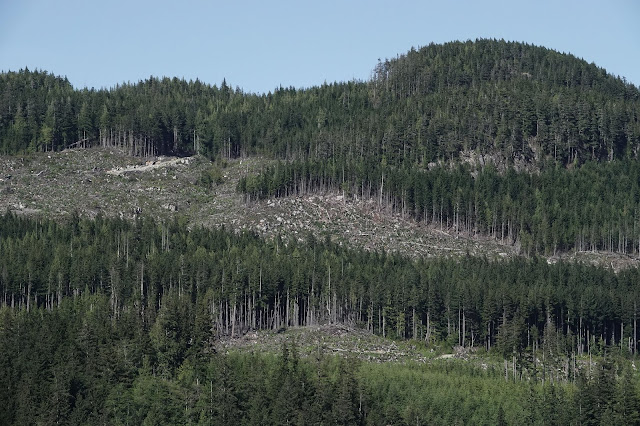 Then I found something I didn't expect. Late in the day, I’d gone up to the top deck to get a picture as we passed the Sayward area.  There, on the last day of the trip, I met a birder from Vancouver.  She’d been getting up early every morning, looking from birds from her balcony, and didn’t even realize our group existed. That was too bad, as she certainly would have been welcome to join us. If I do this again, I will definitely try to set up a birder meet and greet early in the trip.

The group kind of ungrouped today.  With few birds to see, and the sea still glassy all day long, people set about doing last minute things onboard like last dip in the pool, last dessert with lunch, early dinner, late dinner, packing and of course, naps.  There were a few birds here and there, and maybe a list or two made, but I don’t think any of us are likely to be on the deck at dawn.  We disembark at 7:30 am or so, and should be on the 11 am ferry.  It’s been more fantastic than most of us imagined, but it will be good to be home.

Thanks to everyone who shared this amazing voyage.  eBird lists and some tips for future trips will be posted to close out this adventure.

Posted by Ann Nightingale at 2:29 AM