Shearwaters as far as the eye can see!

May 8 between Japan and Russia

I was first to the deck this morning, just before dawn. There were a few gulls flying around the ship, which was unusual. In a few minutes, a few shearwaters started to rise up off the water. Within a few more, there were hundreds. Within in a few more of that, there were thousands. I was beginning to panic a little, as I was still the only one on the deck. How could I count all these birds? I decided to do a one-minute count through my scope. 2000 shearwaters in a minute! For the next 80 minutes, we cruised through a flock of birds the likes of which I had never seen. As far as the eye could see, shearwaters.  Both sides of the ship. With them, there were a few cormorants and loons, but not the diversity we had seen a couple of days earlier. Within that first hour, I estimated conservatively, 300,000 birds. There were probably twice that. Continuing into the next hour another 120,000 on my list.  Thankfully, as we shifted into the next hour, Rob and then John joined me on the deck. They got to see the last part of this amazing spectacle, and then things slow down considerably. A couple of groups of cormorants passed by, and photographs showed the birds had red faces! We were pretty happy about that until we discovered that in this part of the world, the Pelagic Cormorants can have red on their faces as well. Both Arctic and Pacific loons put in an appearance. 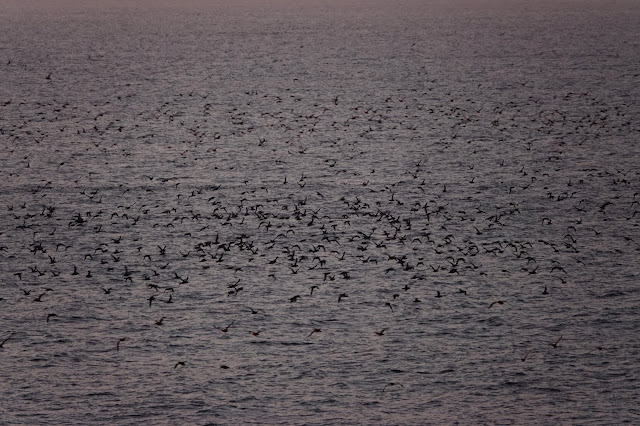 Others started to arrive, only to find out what they had missed. There was a slow but steady stream of birds throughout the day as we entered the fulmar zone.

Another highlight was a pod of 21 Orca, but they were quite far from the ship, so no photographs.
The birding group seems to be hitting its stride, in terms of cruise ship life. There are usually a few of us out on the deck, but breaks are taken, people are sleeping in, and everyone is generally finding their own pace. Many having been trying out the various restaurants, while the diehard birders seem to prefer eating in the main cafeteria.

I even took a dip in the salt-water pool and tried out the hot tub. We're starting to hit a little bit of rough water, so the pool has become a de facto wave pool. It's almost as warm as the hot tub!   It is a little brisk getting out, though, as the temperatures have been getting quite cold from time to time.
I think most of us are surprised at how tiring standing around watching birds can be. Many of us are asleep hours ahead of our normal schedule. It's hard to tell though, because we are changing time zones on a regular basis, and that can have an effect as well. Those of my friends that have trouble with daylight savings time might find this particularly difficult.  Just about every night, we seem to have to set the clocks ahead an hour as we cross the north Pacific.

Around noon, the weather turned foggy, and people moved off to different things, although there were still checklists made the birds we could see within 50 meters of the ship.

We have seen a few unexpected birds landing on the ship or flying by. There were a couple of pigeons, a White Wagtail and a Barn Swallow seen today. I have a whole new appreciation for ship-assisted birds watching this poor swallow make forays from the ship, only to return seconds later. We don't know if it will be able to hold out until we are within sight of land. There certainly aren't many insects here for it to eat.

Posted by Ann Nightingale at 12:56 AM