May 3-5
Well, it looks like we're not in Karuizawa anymore! As you would expect, Tokyo is a huge mass of cement and glass, a world away from the wild bird forest I had just been visiting. Although most of us had now gathered in the Tokyo and Yokohama, areas we were spread among several hotels. I was at the Hearton Hotel in the Shingawa section of Tokyo, and Michael was also staying there. After I stashed my gear in his room (as I had arrived well before check-in), we headed to the Port of Tokyo Wild Bird Park, one of the biggest eBird hot spots in the city. 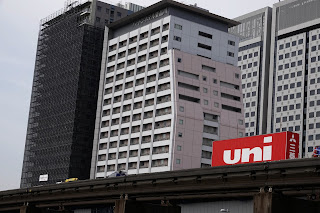 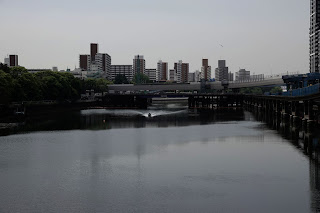 We arrived shortly before noon, hoping to pick up a bite to eat before we got into some serious birding. However there was no place in the park that had snacks or more, so we asked at the ticket booth. They directed us to the Ota warehouse area which was adjacent to the park. Huge warehouses of fish, fruit, and other goods were being loaded and shipped. Forklifts and heavy equipment were everywhere, with large trucks coming and going. No one paid any attention to us as we walked among all of this stuff. But we couldn't find any sign of a place to eat. We finally did a Google restaurant search and found that there was one not too far away, but we walked across the street, we ran into a traffic control guard and through hand gestures and simple English, Michael asked him where to eat. He sent us back to the warehouse, where if you happen to find just exactly the right corridor, there were several little restaurants, presumably feeding the masses of people who worked in the wholesale market. No one in the restaurant spoke a word of English so we resorted to using the translator on my phone to communicate. It wasn't perfect but it worked out quite well.
At the wild bird park, we hadn’t gone very far before we ran into several others from our group. They had been there all day, and had amassed a pretty good list. By the time we got there, the numbers had dropped off, but they were still some cool birds to be seen. There were surprisingly few perching birds around, but we did manage to find a Dusky Thrush and Pygmy Woodpecker right at the end of our visit. Otherwise the activity was more or less restricted to the birds in the canal.

There were all three species of white egret—Little, Intermediate and Great, Great Heron, Greater Scaup, Eurasian Wigeon, many Great Cormorant, a Little Ringed Plover, Ruddy Turnstones, and Whimbrel. Probably the highlight was a distant look at a Common Kingfisher. All the birders got to see that one.
The park is nicely laid out and there are several blinds that can be used to watch the birds more closely. It just seemed like it should be birdier.

We used Google Maps to find your way home, and it put it on a bus that dropped us off pretty close to our hotel. There was a shopping and business center directly across the road, so finding a place to eat was pretty easy. When we met up for dinner, Michael had just figured out that he had left his camera in one of the darkened blinds at the wild bird park. What a nightmare!

But this is Japan. Michael talked with one of the desk clerk at the hotel and asked her if she could call the park in the morning. It was already closed by the time that he noticed just camera gone. He left very specific instructions and she said she would. First thing the next day, Michael went back to the desk and waited while she called the bird park. After a long conversation at her end and then an equally long silence suggesting that someone on the other end was talking, and then the desk clerk smiled. His camera was safe at the park. We hopped on a bus and went back to where we had been yesterday. Since we were already at the park we figured we'd have another look around and picked up one new species for our trip, a Eurasian Moorhen.

Again relying on Google Maps, we figured out our route to Kasai Rinkai Park, the biggest eBird hotspot in Tokyo. Tracy was already there and most of the others who would spent the whole week in Tokyo had put together a pretty good list from the site. When the tide is right, there's a massive mud flat, where many different species of waders have been seen, including Terek Sandpiper. That was a bird I would have loved to seen!

However as we arrived, the tide was in, and although we saw a few shore birds from the blind, we missed the spectacle. There were thousands of people in the park, presumably as part of the Golden Week celebrations, but there is a nice section specifically aimed at bird watching. I have no doubt that this park would be an amazing place if you could visit it frequently, but on our single afternoon there, it wasn't especially impressive. We noticed a similar lack of passerines that we had experienced at the other park. It seems that even though these parks offer a bit of refuge from the big city, it may just be too big for passerines to have much interest in it. We did get decent looks, though, at Azure-winged Magpies.

We caught the train back to hotel, where Christian had now joined us. Still somewhat spread out, all of our group were now within range of the cruise ship.

Early the next morning Michael, Christian, and I walked the green strip that we could see from our motel. Eurasian Tree Sparrow seem to be the dominant bird, but we did pick up a small list of birds to start the day. Just before noon it was time to get on the trains and head to the port.

The transportation network in Tokyo and the rest of Japan is very complex. It's a combination of buses trains, taxis, and a monorail, with many different owners involved. You can buy a pass from one of them, but it won't be accepted on the others. It's quite a challenge to figure out the best way to get from one place to another, but we all managed to get to the port on time.

If you've never boarded a cruise ship, you would probably be surprised by what you would see at the port. Rumor had it that the cruise was completely sold out. That meant about 3000 people trying to get on board. We were herded into a large hangar like structure. Various lines were set up to drop off bags, fill out forms, and ultimately to check in. It can be a multi-hour process that possesses very little of the cachet and glamour associated with cruising. Eventually though, we all got on and most of us were on deck for about an hour of light that remained as we departed. 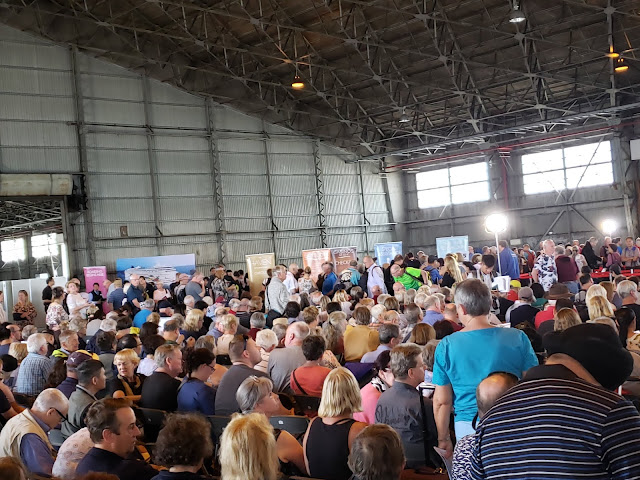 Posted by Ann Nightingale at 6:52 PM