Well, that didn't last long did it? Only a couple of days into my trip and I'm already behind on the blog. I have loads of excuses, but you don't want to hear them. So here we go!

Marilyn I got up early to bird the area around the hotel on Monday morning. There's a lot of vegetation and a good variety of habitats. Our first impression, however,  was that it wasn't particularly birdy. As the time wore on, we managed to put together a half-decent list. And it was somewhat gratifying that we were able to identify most of the birds that we saw (although accuracy is yet to be determined!) As is often the case, there seemed to be more birds in the residential areas than in the vegetated areas.

On the hotel grounds (Radisson Narita) we were able to find a Japanese Wagtail and have a brief glimpse of a very loud Japanese Bush Warbler. The Large-billed Crows were very vocal and, expectedly, there were a few birds that got away.

Wandering the neighborhoods early in the morning seemed a little strange, but very walkable. The homes are very close together, and only a few people were out at that time of the morning-- mostly people walking their dogs. Even though the properties are small, people seem to have some kind of a garden and several lots were taken up with solar panels. Itt was clear that people were very proud of their surroundings.  Major roads had well-defined bike and walking paths, but were noisy.  The traffic noise disappeared quickly once you got on the neighbourhood streets.

In among the houses we got great looks at a lot of new birds for us, including Brown-eared Bulbul, Japanese Pygmy Woodpecker, White Wagtail and several others. We have tentatively identified a sparrow-like bird we saw on the top of a bush as a Black-faced Bunting.

A complete checklist of what we saw, along with a few photos can be found here.

We also had a couple of interesting adventures.  We started going down a laneway that we thought was a public road.  About 10 m in, there was a weird concrete crossing with a thin gap in the middle (across the raodway). On a nearby building was a sign warning us to STOP, but the reason was written in Japanese.  Apparently, we didn't quite stop quickly enough, as all of a sudden, we could hear a whirr, and a wall of water rose up from the gap in the concrete.  It was a true watergate!

One of the dog walkers took a moment to talk to us.  A short while later, he found us outside his house, snapping photos of his goldfish.  Yes, he had an outdoor aquarium with a number of orandas! 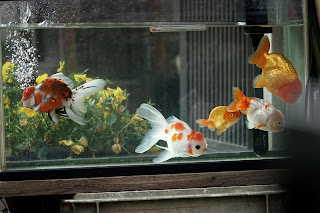 He invited us to look at his garden, which he obviously put a great deal of work into. Despite the language barrier, it was clear that he was very proud of what he had done with his small space.

We returned to the hotel for breakfast with Phil, and then headed out again in a different direction through the neighborhood. This section was more agricultural, and although the bird numbers were still low, we got some great looks, particularly of a White Wagtail that walked right up to us! Eurasian Tree Sparrows are the House Sparrows of Japan. They were everywhere. We spotted a bird that we thought was a shrike, but it took off before we could be sure. Of real treat though was finding a Meadow Bunting in full song. 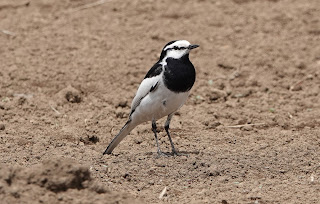 As we headed back to the hotel to catch the bus into Narita, an accipiter, which we identified as a Japanese Sparrow Hawk flew past us.

Then it was on to the bus and into town. Phil and Marilyn had been there the previous day and had spotted a canal that looked like it had great potential. After seeking directions, we made our way down to the canal and walked along it. Despite the promise of an interpretive sign at the entrance, we also found this spot to be less birdy than we would have expected. Wagtails were plentiful, and we did finally see some Eastern Spot-billed Ducks. After a couple of hours of walking the canal, we headed back to thehotel's pickup spot, but not before stopping for a bit of a snack and ice cream. (Not enough time to shop at Daiso, though!)


We'd put about 8 km on the soles of our feet for the day, and they kind of felt like it. The hotel restaurant was just fine for an evening meal, then we packed it in for the night.  Almost.  Tracy had finally arrived, so we had a cup of tea before really calling it a night.  Almost.  Do you know how many hours it takes to go through the day's photos?  I'm going to need at least 6 more hours in the day with this camera!!


Posted by Ann Nightingale at 5:35 PM