My predawn wakeup was mistimed again this morning.  Tracy and I have an inside room, so there is no indication when the sun actually comes up.  My timing for the sun was right, but we were already at the dock, so I had missed the entrance to the harbour.  It happened hours earlier, in the night, but it might have been interesting to see if anything was flying around. 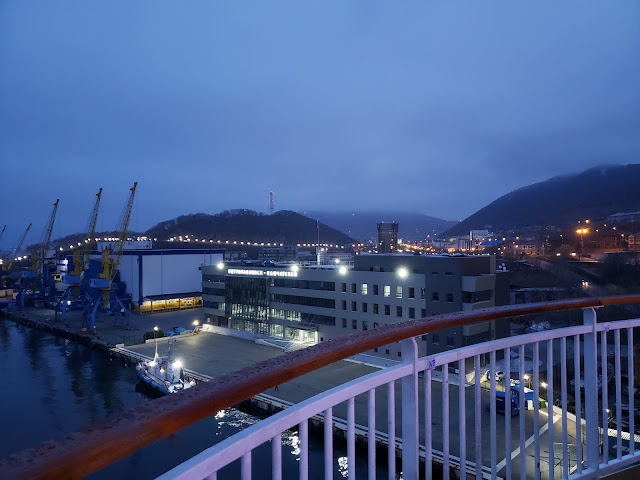 Black-headed and Slaty-backed Gulls were at the dock to greet us.  I’m told that we were fortunate to be at the dock, as in previous years, the ship has been moored at the main harbour and guests were taken ashore by tender, a much lengthier procedure.


We had an independent tour arranged with Favorite Travel Kamchatka, and getting information on when we would leave the ship was like pulling hen’s teeth.   My initial inquiry when we first boarded got a response of 11 am.  Not good.  Our boat tour of Avacha Bay was scheduled to start at 9. I had warned the tour operator that we were not able to tell him what time we’d be disembarking, so it was not a big deal to get him to change to 11. I was also assured that people with independent tours would be able to disembark right after the official shore excursions, before the rest of the tourists could leave. However, last night, we received a notice saying disembarkation and immigration control would be done by deck—with those of use in steerage, I mean on Decks  4 and 5, not able to pick up our passports until 11:30 am.  No amount of persuasion at guest services made any difference.

I planned to be at the passport table an hour ahead of our time, to ensure that we could be at the front of the line.  (This, despite several announcements saying NOT to go to the passport pickup station until our assigned time.) When I arrived, they were already issuing the passports! I quickly called everyone in our group that I could reach, and then headed to the deck to gather up the others. We were all ashore and in our waiting transport van ahead of our scheduled passport pickup! Lesson learned: Don't follow the instructions!

After a short ride in the van, we reached the somewhat industrial dock where our boat was waiting for us.  I had no idea what to expect.  Although the word “yacht” had been used in the description, and the company had decent reviews, we didn’t know if we’d be loaded onto zodiacs, sailboats, or whatever.  As it turned out, we had about a 40 ft, two-deck vessel, with enough room for all of us and four crew, including an ornithologist and Vyacheslav from the tour company, who would serve as our interpreter. 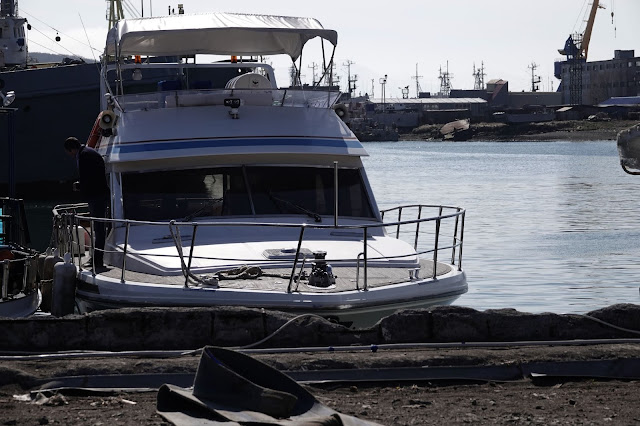 Our first stop would be a known location of a Steller’s Sea Eagle nest, a wonderful surprise for us, but no guarantees.  As we moved out of the calm waters of the dock area, we picked up a pretty good swell, and a few jokes were made about seasickness.  Those who have followed my previous adventures know all about my bouts of mal de mer! At the nest site, a Steller’s Sea Eagle was perched on the top of the promontory, and on closer inspection of the nest, a second could be seen hunkered down.  Our tour had just started, and was already a success! 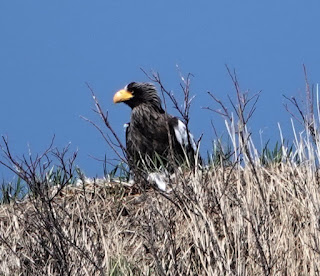 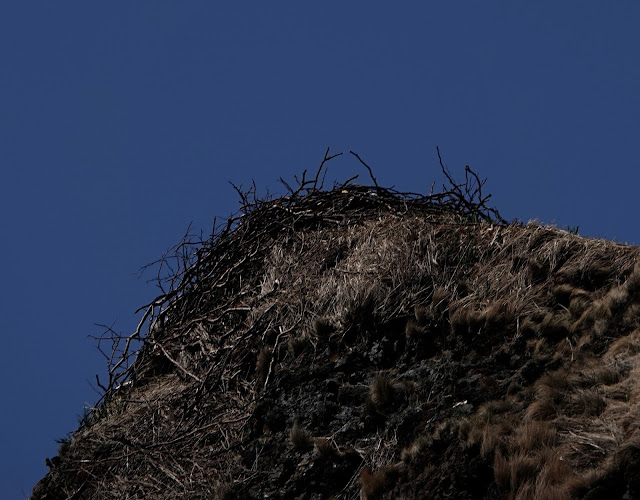 We then headed out to a number of seabird colonies, where Thick-billed and Common Murres, Red-faced Cormorants, Slaty-backed Gulls, Black-legged Kittiwakes and Tufted Puffins were present in huge numbers.  It was spectacle after spectacle! About half of the people on board had cameras at the ready, and I have no doubt that millions of pixels were expended on that trip!  To top it all off, we found two more Steller’s Sea Eagles at one of the colonies, and a fifth was seen circling a lighthouse that we passed.   (Once we get all the data into eBird, I will append the lists to each blog post.  Come back later if you wish to see the numbers.)

The one thing that was missing was Vyacheslav, who was the only person on the boat who got seasick.  He spent most of the trip near death in the cabin below.  We managed to communicate with the ornithologist ourselves, as he was able to speak a bit of English.

At the farthest colony, Tatayana served up a delicious soup that she managed to make while our boat was pitching and tossing on the waves of Avacha Bay.

Heading back to port, we saw Pigeon Guillemots, Ancient or Japanese Murrelets (still to be determined which they were), Red-necked Phalaropes, Pelagic Cormorants, and several species of gulls.  Just before we got back to Petropavlovsk, Tatayana brought out two trays of fresh crab legs for us to eat on our way to port.  A fine finish to an amazing day!

We got back to the ship and cleared through customs by the all aboard time, but several others of our travellers did not.  This delayed the departure of the ship until after sundown, sadly depriving us of the opportunity for a second look at the birds of the bay.  The day couldn’t have been more stunning. 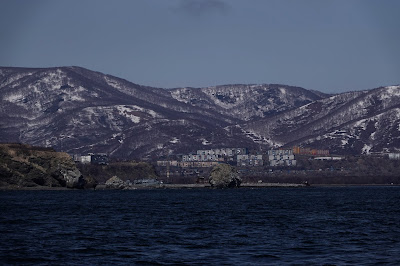 Next, four days of the open ocean of the North Pacific.  Gravol and patches at the ready!

Posted by Ann Nightingale at 11:35 PM