We are learning that each day can be very different than the previous. This morning, not one bird was seen between our early arrival on the deck and an hour later. We were nearing Hokkaido, with a planned stop in Otaru.


Even though we left Yokohama just two days ago and have not being ashore since, we were treated as new visitors to Japan when we arrive, so we had to go through a customs and immigration process. Some of us booked a tour which took us to three spots in the area, while others made their own plans ashore. I was on one of the tours, hoping to divert from the official program to bird at the stops.
First stop was a nearby mountaintop lookout above Otaru. About half of our group rode the cable car up Mt. Tenguyama, but sadly only had about 20 minutes at the top. There were a few birds, including crows chasing a Black Kite, a Eurasian Nuthatch, and a warbler that will likely never be identified.


\
The second stop was at the home and grounds of one of the most prominent founders of this community. Along with a few others, I skipped the tour of the house and just went birding around the area. That was our original plan, and we played it out. Mary, Jan, and I wandered into a residential/industrial area. Birds were not plentiful but we had our best looks at a Black Kite, which is almost as large as an eagle, and saw our first Osprey of the trip.

The next stop was at a shopping area in town. I had hoped this would have given us a chance to look at the canal and possibly find some birds there, but the section of the canal near where we were was pretty industrial, hard to get too, and was very little time, that part of the plan did not come to fruition. There was a huge parking lot field with tour buses. It's very clear how important cruise tourism is to this town.


The others who set out on the old their own, ended up at the base of Mt. Tenguyama, where it was apparently a little birdier than the top. Michael finally got his Narcissus Flycatcher and Ashlea had a brief glimpse of a Japanese White-eye.

While we were making our way back onto the ship, Jim had a little run in with the local authorities as he wandered off line to try to take a picture of the ship. That distraction allowed me to actually get a picture as we were boarding. 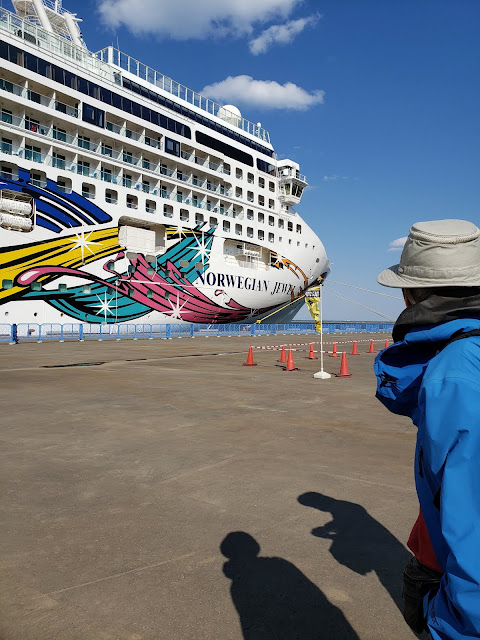 It was almost dark by the time we departed Otaru, but we were out on deck watching the gulls take advantage of the ship starting up its thrusters. It was almost like we created our own baitball just off the ship. A great opportunity to take gull pictures although the light was getting poor.