Whoever coined the word "luggage" must have had my stuff in mind. After hearing the dire warnings about the crowds on the trains to Kariuzawa, and concerned that I might have to stand, I decided to try to compress my three bags into two.  My small carryon with camera and optics gear would go inside my rolling duffle, and my backpack would be packed to the hilt with everything I might need for the day. Yeah, right.  In any case, by the time I was done repacking, I think my rolling bag probably weighed upwards of 65 lbs and my backpack about 20. I was about to try to navigate the Japanese rail system with more than half my bodyweight in tow. Before you judge me, remember that I was packed for three weeks, including enough gear to keep me warm and dry in the north Pacific.

I caught the hotel shuttle to the airport and made my way to the train station, only to find that the reservation clerk from last night had scheduled me from the wrong location.  The good news was that it was an easy fix. I had a seat on the Narita Express to Tokyo Station where the adventure would really begin.  The Narita Express was a wonderfully comfortable and empty train. 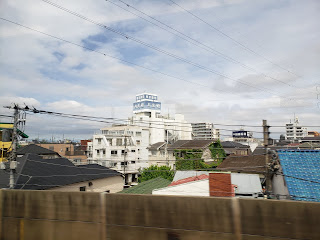 The Narita airport is a very busy place, as you might imagine, but it doesn't hold a candle to the Tokyo train station.  I don't think I've ever been anywhere with so many people and so many directions to go. Getting a seat on the train to Kariuzawa depended on getting in line early.  There are three unreserved cars on the train, and according to what I'd read, they were 1, 2, and 3.  Even though I was there 40 minutes ahead of departure, the lines were already long. I'd have to pick a car and gamble that there would be enough open seats.  I went with car 2 and ---WON!  I got a seat for the trip.  Whooo hoo! I'll admit to feeling a bit like an elephant with all that gear, but didn't kill anyone as I tried to manipulate it all into place. There were only a few people standing at the start, but by the time we made a few stops, the aisle was full. (I found out that Tracy had managed to find a seat in an unreserved car the day before, so hadn't had to stand all the way to Karuizawa, after all.) 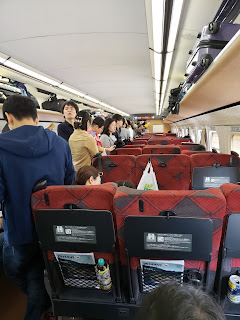 Arriving in Kariuzawa, I managed to strongarm the gear down a very steep and dangerous ramp to get to the bus stop, and even thought I had found the right bus.  Getting confirmation of that was extremely difficult, but yes, that was the one!  Sadly, though, although my body might have squeezed onto this very crowded bus, there was no way my gear was going to.  I waved goodbye as yet another bus drove away without me. And then the drizzle started. After considering waiting an hour for the next bus, I decided that time was wasting, and decided to take a cab.The traffic was atrocious, but we got there.  I dropped my gear at the ryokan where I would be staying, and with bins and camera in hand, headed to the Tokyo Wild Bird Forest, to meet up with Tracy and Rob.


Karuizawa is a resort town, and with Golden Week in full force, there were people everywhere. There were birds, too, but I didn't stop to look at them on my way to the park. I found Rob and Tracy at the nature centre, sheltering from the drizzle.  They had already amassed a pretty impressive list for the day and mine got underway from the covered viewing area. Blue and White Flycatcher, Narcissus Flycatcher, Long-tailed Tit -- not a bad way to start a list! The drizzle finally let up, and we headed to the trails. As I stepped over the chain across the driveway, my trailing foot managed to catch it, and down I went, face-first, into the mud.  Well, my face didn't get any mud, but I sure did, as did my camera and binoculars. Fortunately, not was on the lenses, so we just continued on as planned.


Despite the people and the weather, the birding was good, with excellent views of many of them.  A Blue and White Flycatcher almost seemed to be following us along the trail.  We only managed a couple of hours before the skies really opened up and we had to call it a day.  Here are some of the birds we saw at the Wild Bird Park over the two days that I was there.


There are a few photos birds yet to be identified, and some eBird Checklists to update.  All in good time!

Posted by Ann Nightingale at 3:29 PM